A series of hydrogeologic projects supported by Geoscience BC and others are aiding water management decisions in northeast BC’s most active natural gas production area.

The Challenge
In the mid 2000s, Canada’s energy sector turned its attention to some of the world’s largest known natural gas reserves in northeast British Columbia and northwest Alberta’s Montney Formation. Advances in multi-stage hydraulic fracturing technology and extended-reach horizontal drilling made it possible to economically develop unconventional gas and oil in the Montney, but development of natural gas from the tight siltstone requires significant quantities of water.

Initially, surface water and shallow groundwater were used for the stimulations, but operators quickly looked for ways to mitigate fresh water use. Saline waters, although presenting their own unique challenges from a completion and reservoir compatibility perspective, were identified as a potential alternate to fresh water use. The challenge was to find suitable aquifers capable of producing enough saline water to support hydraulic fracturing operations. 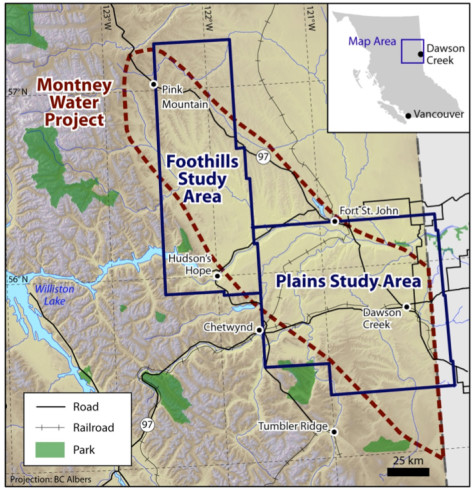 Report 2011-11 shows that suitable aquifers are unevenly distributed and maps potential in formations in the plains and foothills areas.

Modelling the Hydrologic Cycle and Hydrogeology in Northeast BC
Following the success of a similar project in the Horn River Basin, Geoscience BC launched the Montney Water Project series in 2010 to visualize the regional water picture. The goals were to better understand the water balance in the Montney Play area, on the surface and in the subsurface, and from that to identify shallow and deep water sources which could be sustainably accessed.

To better understand the surface water balance in the region, Geoscience BC partnered with natural gas producers, the BC government and the BC Oil and Gas Commission (OGC) to examine water supply in northeast BC from different perspectives and to create an online hydrological application which could be used to inform water management practices and help with the review of water use applications (the Northeast Water Tool - NEWT - is a hydrology decision support tool hosted by the OGC).

In 2011, Petrel Robertson and Canadian Discovery delivered Geoscience BC Report 2011-11. It mapped the distribution of deep subsurface saline aquifers and assessed their quality using well logs, cores, wellsite cuttings logs and well test data. In summary, it found that deep subsurface aquifers with sufficient quality to support Montney water requirements are unevenly distributed. The Cadomin-Nikanassin formations are the most prospective in the plains. In the foothills region the Bluesky-Gething, Nikanassin, Baldonnel and Debolt formations are also prospective, although much more localized with deliverability linked to structuring. 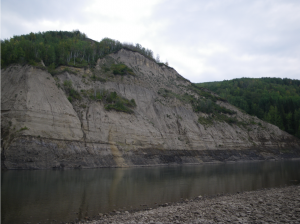 Another Montney Water Project report (Geoscience BC Report 2011-12), authored by Foundry Spatial, produced a series of seven watershed posters incorporating various aspects of the hydrologic cycle including data about streamflow, precipitation, evapo-transpiration, surficial geology, land use and vegetative cover, along with current and future climate models. This suite of data was critical to the development of the NEWT online hydrological application.

An additional two collaborative projects with the BC Ministry of Energy, Mines and Petroleum Resources generated maps of the surface and near-surface geology and hydrogeology in the Montney. Geoscience BC Report 2011-07 contains five maps which depict bedrock topography, drift thickness, a modern interpretation of paleovalleys and density of bedrock contact point data. Geoscience BC Report 2011-08 presents a map of surface materials compiled from two previously published surficial geology maps completed by the Geological Survey of Canada. Mapping the region’s Quaternary geology and paleovalleys added to the understanding of shallow aquifers, with the identification of over 20 new aquifers, and the revision of over 35 previously defined aquifers.

Data Applications
The regional data and maps compiled during the Montney Water Project are available on the Geoscience BC website, with project outlines available on Earth Science Viewer. The data is also available in other tools such as the NEWT.

Informed Decisions
The Montney Water Project provides a regional evaluation of deep saline aquifers in the Montney. It has allowed energy companies to more efficiently and more effectively pinpoint deep saline water sources for their operations. In 2012, Encana (now Ovintiv) invested millions of dollars to build its Montney Water Resource Hub in the Bessborough-Farmington area, approximately 20 kilometres from Dawson Creek. The hub withdraws saline water not suitable for human consumption or agriculture, which is then sent by pipeline to pads via pipeline, reducing traffic and community impacts.