Scratching the Surface Before Digging Deep

Three Geoscience BC minerals research projects have used samples collected at the surface to interpolate what is buried deep below. These geochemistry projects are great resources to design mineral exploration programs in British Columbia.

The Challenge
Mineral deposits are often buried deeply below the surface making them difficult to find. As a mineral deposit forms it can leave many geochemical clues all around it, pointing to a mineral rich core. Exploration geochemistry has traditionally relied on methods such as stream sediment or soil geochemistry to detect near surface mineralization. However, these methods can be less effective in areas of transported cover, such as in central British Columbia where most of the region is covered by glacially derived sediments or young volcanic rocks. Searching for those geochemical clues has lead geologists and geochemists to develop new techniques that use a sample collected at the surface to discover what is buried deep below.

Scratching the Surface
Reducing the risk and increasing the accuracy of deep mineral exploration from surface sampling requires extensive research and testing. Fortunately, Geoscience BC projects have been able to access known porphyry deposits in BC’s North Central and South Central Regions. First to be studied were the Kwanika and Mt. Milligan deposits, where in 2009 Dave Heberlein of Heberlein Geoconsulting led a program designed to test several widely used analytical methods on different layers of soil to determine which detects the deposits the best in this environment.

Four samples were collected from different soil horizons at each sample site. The samples were then analyzed using 13 different commercially available methods to determine which provided the most compelling responses to the mineralization buried deeply below.

At Kwanika, where the mineral deposit is covered by at least 40 metres of undisturbed glacial sediments and is as deep as 300 metres below the surface, sampling the Ah horizon and using a weak aqua regia-low detection limit ICP-MS analyses was the most successful. Soil pH and conductivity measurements were also useful in identifying possible redox “chimneys” over buried sulphide mineralization. Results were very similar at Mt. Milligan, where the deposit is much shallower, but significantly more surface disturbance has occurred. 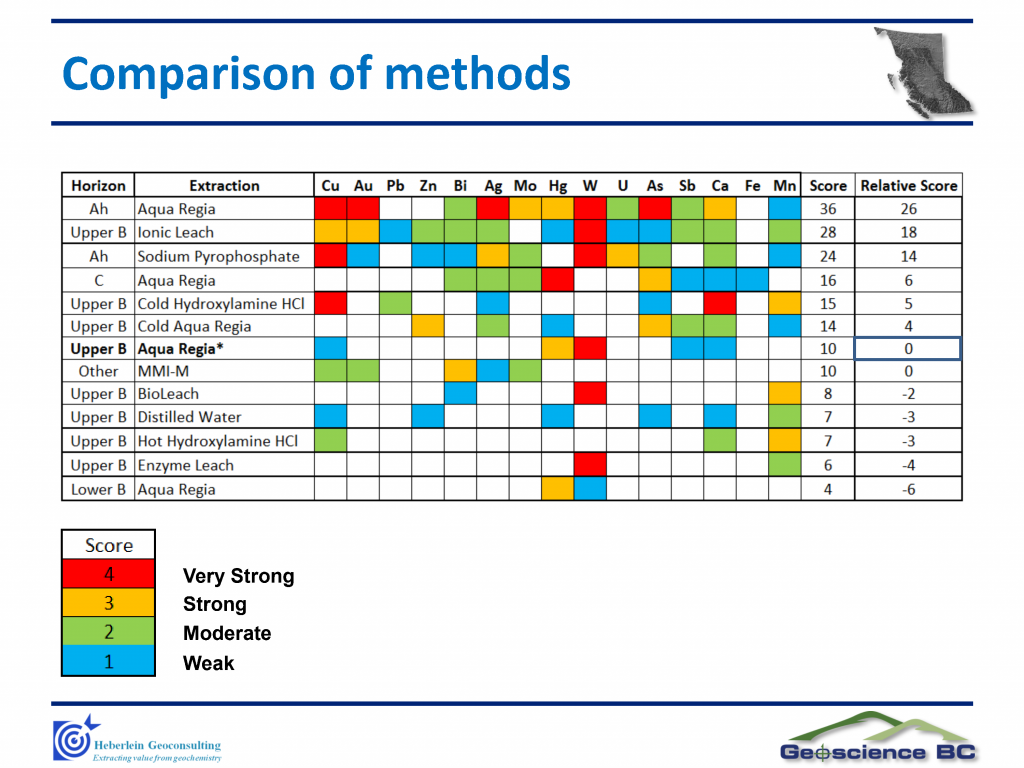 Refining the Technique
The following year Dave Heberlein and Colin Dunn conducted another trial at the Kwanika deposit to follow up on the results from the previous study. This study focused on the promising Ah soil horizon identified from the previous survey, however this time the samples were collected over a grid with the intent of collecting samples not just directly above the deposit. Three chemical digestions were tested, with Ultratrace (a 1:1 mixture of nitric and hydrochloric acids and distilled water) being the most effective at detecting porphyry copper-gold mineralization buried beneath glacial sediments. 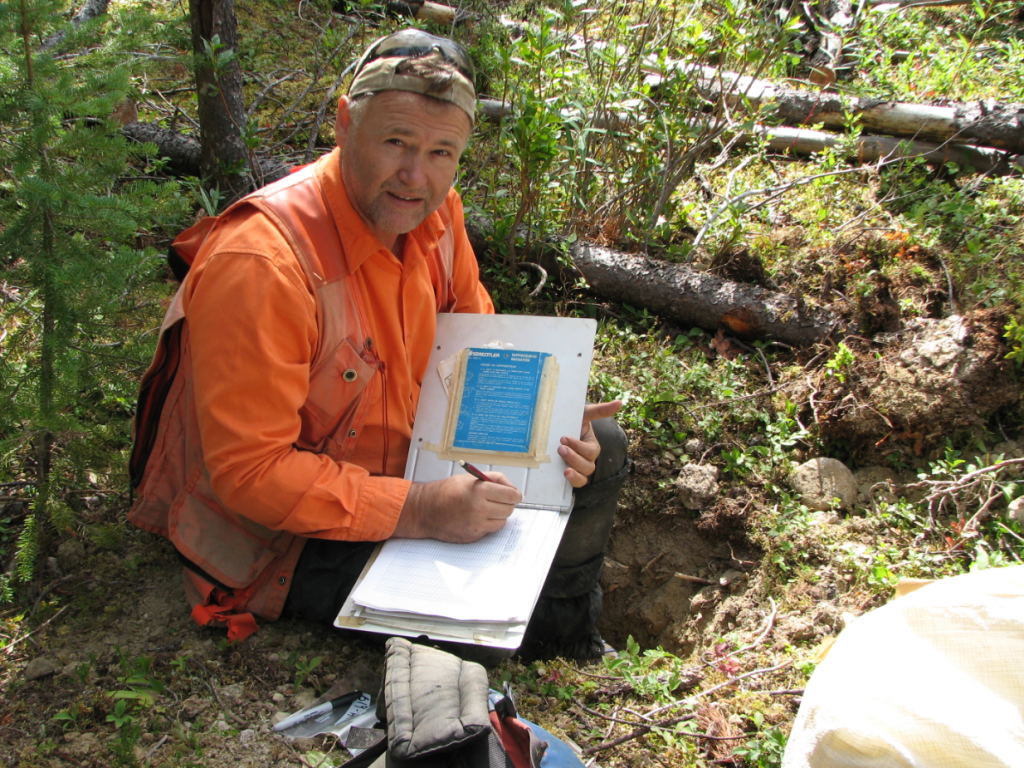 Digging Deeper
The question now became whether these methods could detect a mineral deposit buried beneath the glacial sediments and basalt rocks which cover much of central BC. The Woodjam area was identified as a suitable test case for a new study led by Thomas Bissig (MDRU), Dave Heberlein and Colin Dunn. This study sampled two soil horizons along with rock and biogeochemical media. Results indicate that detection of mineralization under basalt cover is possible, with columnar jointing and vesicles in the basalts providing conduits for vertical ion transport. The project again indicated that with the right technique chosen for the ground and deposit a geochemical survey of surface samples can indicate buried mineralization. 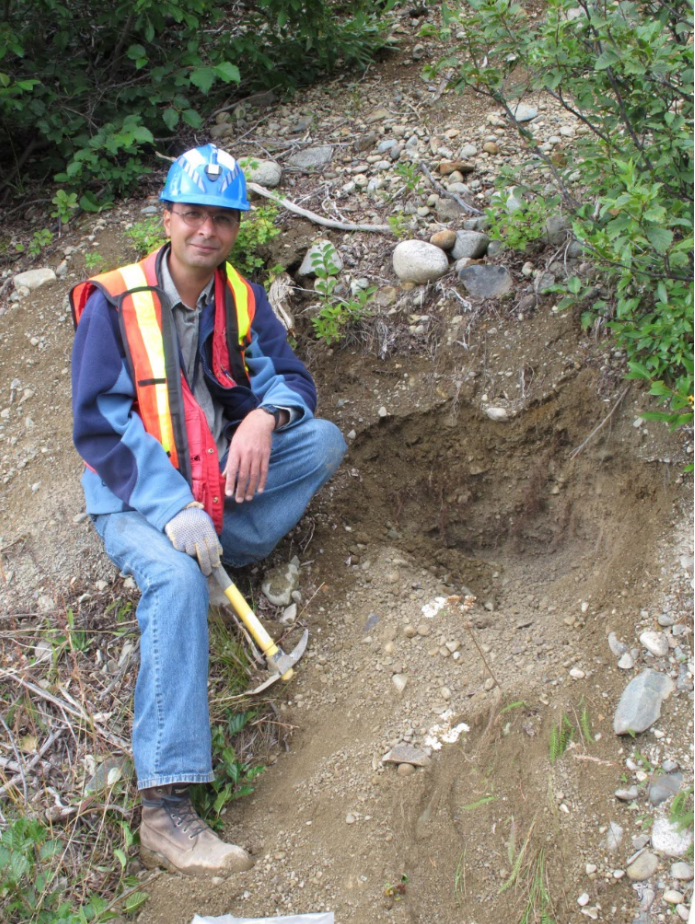 The Future is in the Trees?
The three soil geochemical studies at Mt Milligan, Kwanika and Woodjam show that near surface soil samples can help detect mineralization beneath glacial sediment and/or basalt cover. These studies have provided a wealth of comparisons that will help mineral explorers design and develop the appropriate sampling strategy for their own projects. However, it is not the only story. The Woodjam study and second study at Kwanika also reinvigorated research into using biogeochemical sampling (e.g. bark, twigs and needles) to detect buried mineralization. But that is a story for another day…