In mid-2012, a consortium funded by Geoscience BC and the BC Oil & Gas Research and Innovation Society (BCOGRIS), along with partners the BC Oil & Gas Commission (BCOGC) and Natural Resources Canada (NRCan), initiated a project to add seismograph stations to complement the two pre-existing Canadian National Seismograph Network (CNSN) stations in northeastern BC (Salas et al., 2013; Salas and Walker, 2014). Since then, an additional 35 stations have been added to the regional network. Information gathered by this network has been instrumental in helping the regulator understand induced seismicity whilst guiding regulatory decisions and helping natural gas operators design best practices for the mitigation of such events.

Induced seismicity due to enhanced oil recovery-disposal and hydraulic fracturing
The first known occurrence of induced seismicity from oil and operations in BC’s Northeast Region (NEBC) was in the mid-1980s as a result of an enhanced oil recovery scheme in the Eagle Field, north of Fort St. John. The highest recorded magnitude event attributed to the operation was 4.1M, and there were reports of cracked plaster, fallen pictures and small objects knocked off their shelves. In response to the Eagle Field incident, the regulator ordered the injection pressure be lowered, resulting in the gradual abatement of induced seismic activity.

The next notable occurrences of induced seismicity related to oil and gas operations occurred north of Fort Nelson in the Horn River Basin during 2009-2011. During this period, 38 seismic events ranging in magnitude from 2.2M to 3.8M were measured. The largest event was felt on surface, although no injuries or damage was reported . Unlike the events in the Eagle Field, these were definitively attributed to hydraulic fracturing as outlined in the BCOGC’s Investigation of Observed Seismicity in the Horn River Basin report (2012).

Multiple Seismic Networks Gathering Public Data
As a follow-up to the BCOGC’s aforementioned report, the BC Seismic Research Consortium (BCSRC) was formed in 2012 to increase the understanding of induced seismicity associated with oil and gas operations. As part of its mandate, the Induced Seismicity Monitoring Project was launched in the spring of 2013, which added six seismographs to the existing two stations of the CNSN.

Presently there are five networks which are core to locating earthquakes in the region. The BCSRC directly participates in the PQ network (nine stations), the 1E network (11 stations) and the McGill-deployed XL Network (17 stations). In addition, the University of Calgary continues to operate its 13-station EO network within the Kiskatinaw Seismic Mitigation and Monitoring Area (KSMMA) area (Figure 1). Data captured from the EO network stations are available on a 91 day rolling data embargo. All the other seismic data can be downloaded from National WaveForm Archive (NWFA).

Seismic Analyst
In order to facilitate earthquake detection, the BCSRC has employed a full-time seismic analyst (Ryan Visser) who has developed an automated AI picking system which has allowed a high-quality and up-to-date earthquake catalogue to be provided to regulators and research partners much faster than was previously possible. To date, researchers affiliated to the BCSRC (Dr. Ali Mahani, Ryan Visser and NRCan’s Dr. Honn Kao) have published an impressive 74 papers on induced seismicity data from NEBC (Figure 2). In addition, the availability of this data from these networks has allowed academic institutions such as the University of British Columbia, University of Calgary and McGill University to do specialized research along the Montney Trend of NEBC, and specifically within the KSMMA area. In addition, Geoscience BC has been able to fund five research projects focused on induced seismicity in NEBC, which are answering questions raised by the Scientific Hydraulic Fracturing Review panel. 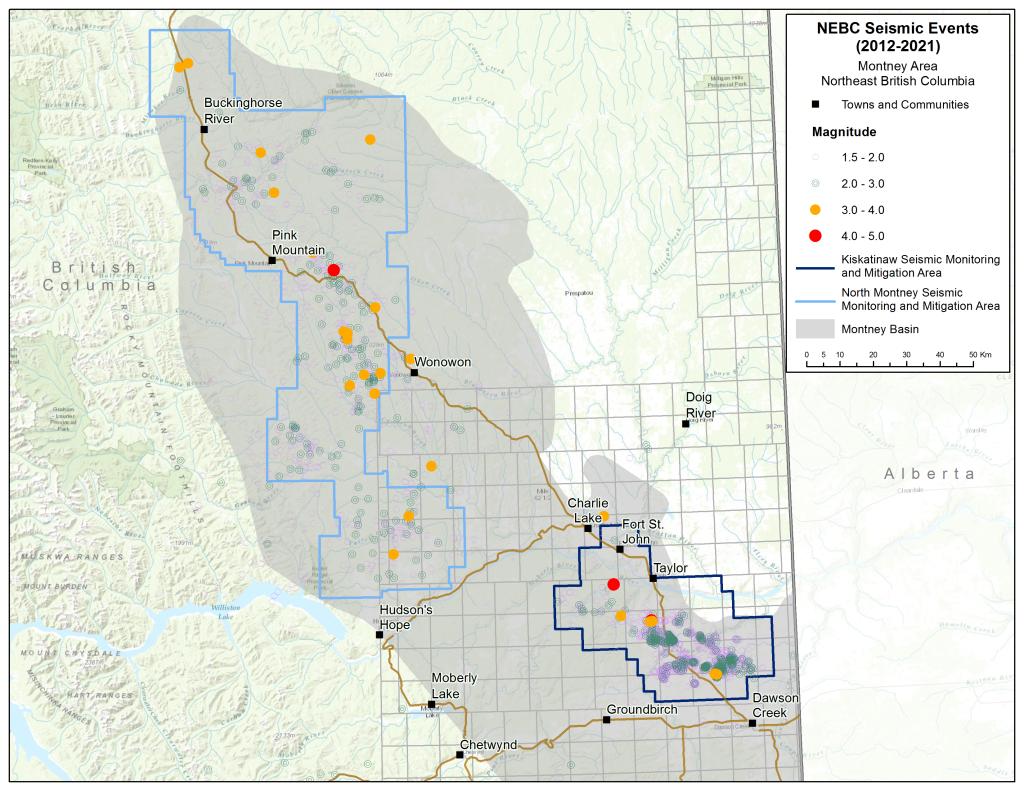 Figure 2. NEBC seismic events detected by the various networks during the period 2012-2021. Note: Most of the events along the Rocky Mountain Foothills, around Williston Lake are likely due to blasting from coal mining operations.

Conclusion
The enhancement of the public seismograph network in NEBC initiated by the BCSRC in 2012 has seen the total number of stations increase from 2 to 37, across various networks. These are capturing essential seismic data, which is being disseminated freely into the public domain.

The data is being used by researchers, the natural gas industry and the regulator to further the understanding of causes of induced seismicity and how to best regulate and improve mitigation measures. Continued funding of such research is critical in keeping British Columbia, and Canada, in the forefront of responsibly produced, low carbon, natural gas.