The Challenge
The world is on the cusp of a massive energy transition, much like the move from whale oil and coal to kerosene and petroleum energy sources in the late 19th century. Today, the shift is towards electrification and hydrogen. Geothermal energy usage is common throughout the world, especially in the Circum-Pacific Belt, yet there is currently no geothermal energy generation in Canada.

Traditionally, the Western Canada Sedimentary Basin is known for its abundance of oil and natural gas, but it is relatively unknown that it has massive potential for alternative energy. Northeast BC (NEBC) lies within a hot sedimentary basin: an area with above average heat flow due to underlying radiogenic basement rocks. The potential for geothermal energy usage in the region could not only help the natural gas industry reduce greenhouse gas (GHG) emissions, but could also help communities supplement heating costs, with further potential to produce green hydrogen using excess geothermal power capacity. 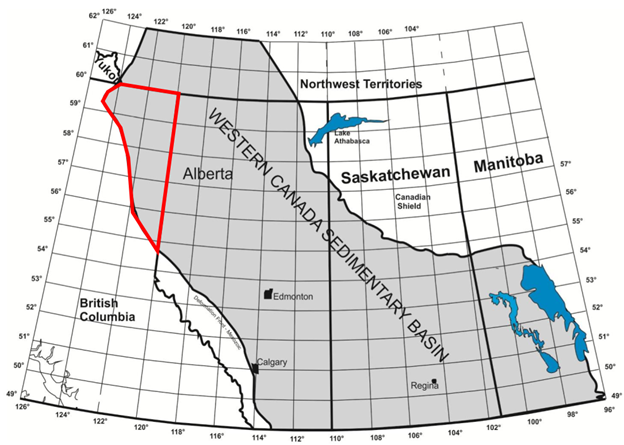 Economic Viability
The first study (An Assessment of Economic Viability of Selected Geothermal Resources in British Columbia, Geoscience BC Report 2015-11) was completed by Kerr Wood Leidel and Geothermex. It focused on a province-wide high-level look at the economic viability of geothermal power generation at 18 sites of which two, Clarke Lake and Jedney, were identified as notable targets in NEBC. 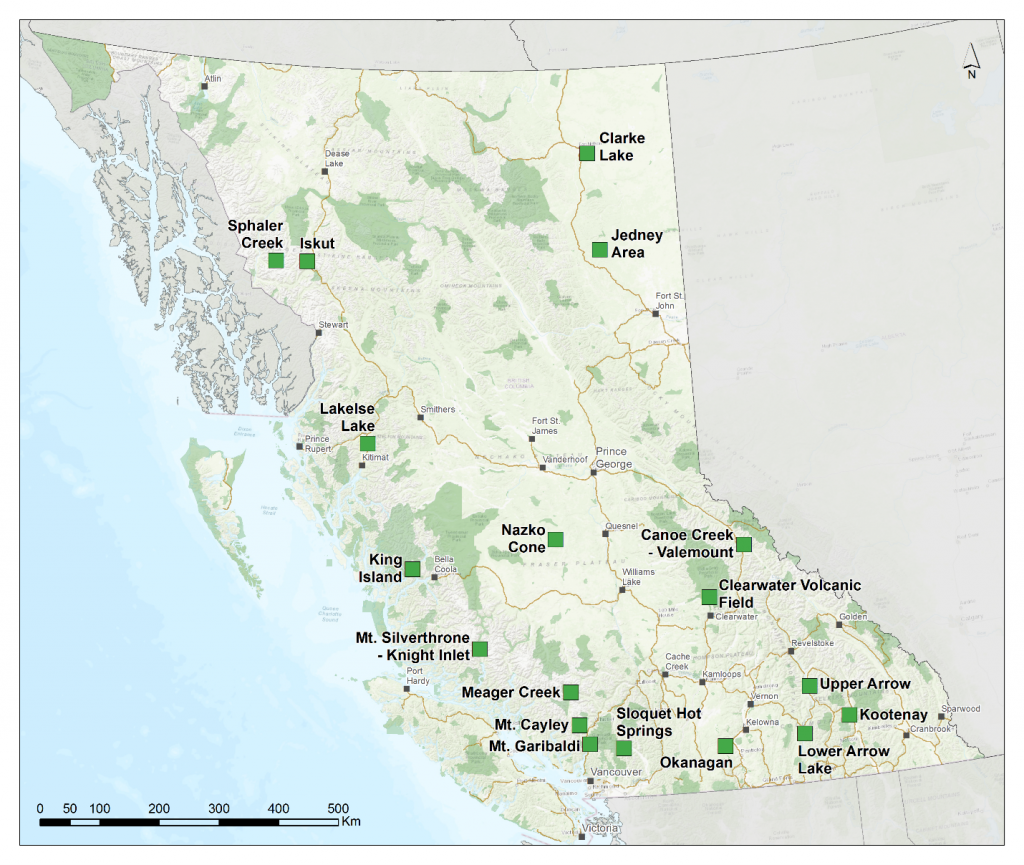 Tuya Terra Geo Corp. and Geothermal Management Company, Inc. authored the second study (Direct-use Geothermal Resources, Geoscience BC Report 2016-07) in British Columbia, providing a roadmap for direct heat use, an often-neglected use of geothermal power. The study outlined the various potential applications of direct-use heating (e.g. wood products kiln-drying, community heating, greenhouses and aquaculture) and a roadmap for communities on how to self-assess for applicability.

The next three projects further refined the potential for geothermal power generation in NEBC with the first study by Kevin Palmer-Wilson et al. (Techno-Economic assessment of Geothermal Energy Resources in the Sedimentary Basin in Northeastern British Columbia, Canada, Geoscience BC Report 2018-18) creating a favourability map for power generation in the region. In total four hotspots were identified: Horn River, Clarke Lake, Prophet River and Jedney (Figure 3). 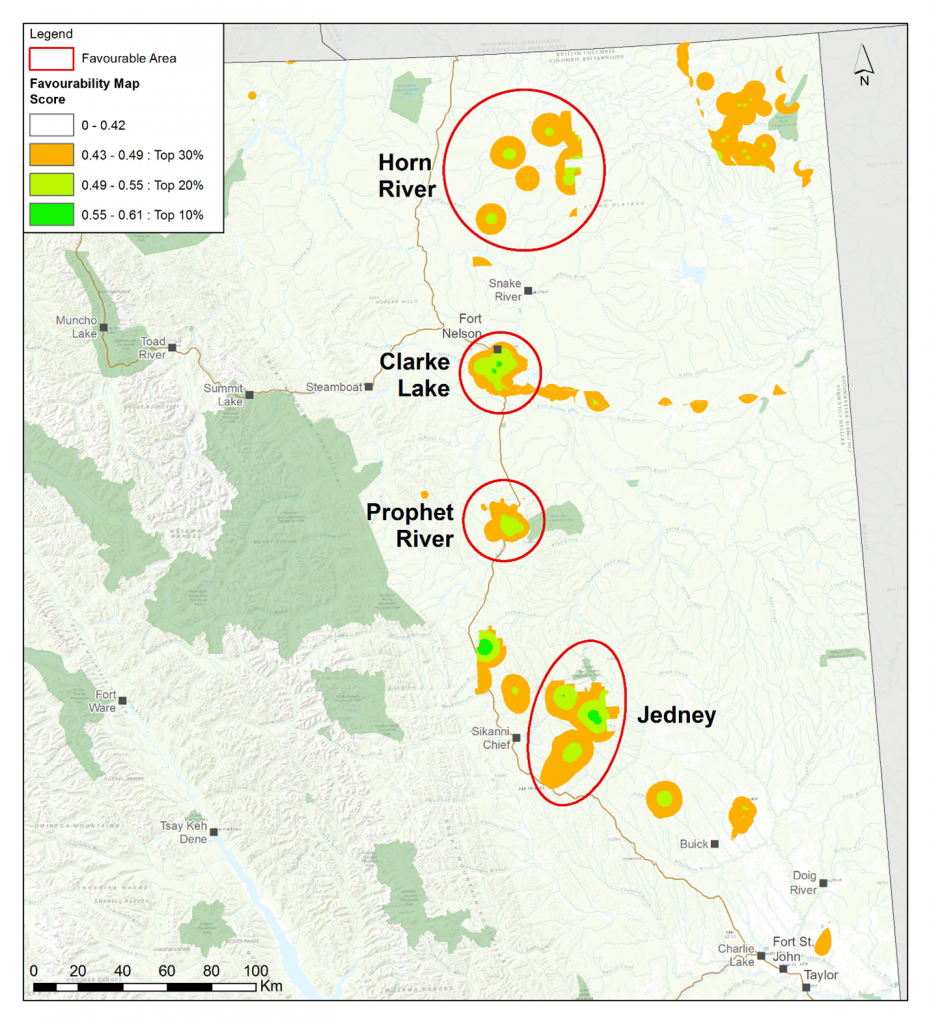 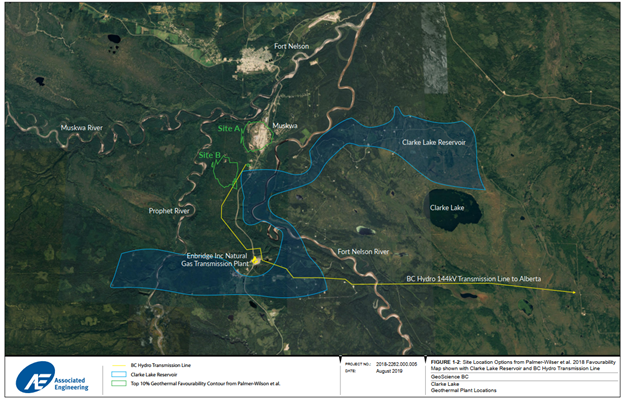 Providing critical intellectual infrastructure in the form of public geoscience is key to seeding resource development, whether it be geophysics for mineral exploration, or baseline water studies for responsible natural gas development. The availability of geothermal technical studies over the Clarke Lake Field gave Fort Nelson First Nation’s Deh Tai Development Corp. the needed base geoscience to secure $40.5 million in federal funding for the initiation of the project. They expect to begin drilling this summer.

These smaller 7-15MW plants could be employed in areas where access to traditional transmission lines would be uneconomic, with the potential to lower GHG emissions from natural gas development and use excess capacity for green hydrogen generation. Integration of direct-use heating into economic development plans could help communities to reduce heating costs and attract new businesses. The plants also provide an opportunity for Indigenous groups in the area to be involved in a new industry from the beginning of its development, be it through ownership or taking advantage of stable, local employment and capacity building opportunities.